Below is a selection of fastener sizes and general torque settings that may be useful.

(This is the best that I could do in getting the original spread sheet to fit on the blog page. It will be added to as I continue with the refurb).

N.B. The interior chassis bolts that came off my car were in 2 lengths as shown. This seems to be the classic case on initial assembly that the factory used whatever was available. You can choose whichever length you want as both fit with no problems in all the fastening locations.

The following is a selection of which bolts and nuts need what size sockets and spanners. Please don’t take this as gospel as it may have been the case that the sockets/spanners I used worked for that particular application (even they may not have been the actual correct size). If anything its a good starting point.

This is a general list that has been floating around a while on the various TVR forums and I thought I’d collate it all together. If the original owner/creator wants me to remove it I will do so immediately.

I’m not too sure if these will help or not, but with my limited graphical skills these are the best I could come up with. The following show roughly the routes that some of the pipes/hoses/systems take on their way through the chassis: 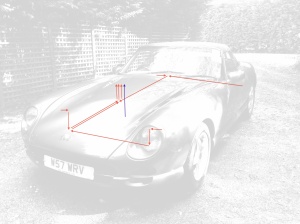 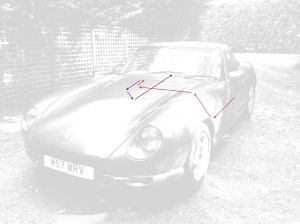 From the tank to the fuel rail in Red, running down the chassis backbone and over the bell housing to the rail. From the rail back to the tank in Blue. 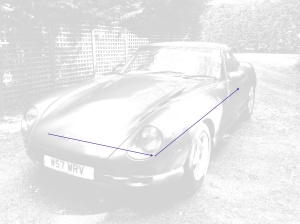 Carbon Canister pipe, exiting in the very forward lower off side section of the engine bay, coming across the front of the car and then heading down the chassis backbone to the fuel tank 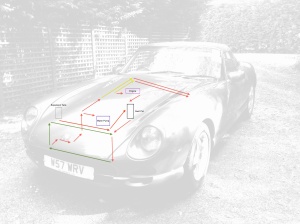 The cooling system diagram isn’t the easiest to follow so I’ll explain a little more. Starting at the bottom left of frame, the pipe proceeds out of the bottom of the radiator. This pipe then splits, with one side branching off to the water pump and the other to the water rail attached to the off side rocker cover. At the other end of the water rail are the two hoses leading to and from the heater matrix inside the near side wing. The final water rail connection then goes to the top of the engine block. Centre of frame is the pipe coming out of the engine to the top of the swirl pot, before exiting out the bottom of the pot and back to the other side (off side) of the radiator. Finally there is also the pipe from the expansion tank to the swirl pot as well. Definitely recommend zooming in on the picture.

If I can think of anymore potential diagrams then these will be included as and when.